A few of us at Team Seagrass have been doing fieldwork in Northern CA in order to collect seagrass relatives. We have specifically been targeting freshwater species (highlighted in blue in the below phylogeny). We will continue with marine and brackish species when the tides in the San Francisco Bay are lower.

We have been following the methods detailed in https://seagrassmicrobiome.org/sample-collection-and-preservation/ and have managed to collect a few representative species from the following clades: Potamogetonaceae, Alismataceae, Hydrocharitaceae, Najadaceae, and the Lilaceae.

For further plant identification and the construction of a ‘host phylogeny’ we will be using chloroplast DNA markers.

In addition to what we have sampled thus far, we have also managed to sample some outgroups (Myriophyllum, Ceratophyllum, and Camboba). We will hopefully be able to sample additional outgroup species shown on the above tree.

We have been successful in 7 out of the 10 locations that we have tried. The lack of success so far can be attributed to drought conditions in CA and the increase in invasive submerged aquatic vegetation (e.g. Myriophyllum, Water Milfoil; and Eichhornia crassipes, Water Hyacinth). Water Milfoil and Water Hyacinth form dense mats below and above water, respectively, outcompeting native vegetation. Even in sites where we been successful, much of the area we surveyed has been overrun with these two invasive species.

Obviously drought has also been an issue for us, as many of the lakes and tributaries have little to no water in them this year, resulting in a lack of any aquatic vegetation. Water levels in Folsom Lake, for example, are so far reduced that the Park Service has had to build additional parking lots on the water side of the boat ramp in order for people to be able to get close to the new shoreline.

In the following weeks we will head up to the foothills in search of remaining freshwater species, as well as explore the Bay Area coastline and salt marsh/Delta area for marine and brackish species. Stay tuned!

Armed with some instructions for where to find a few different seagrass species and a couple of names to ask for, I headed to the Smithsonian Marine Station (SMS) in Fort Pierce, FL on Thursday, April 17th.

The SMS was kind of deserted, but there was a behind the scenes tour scheduled for 2pm, so I waited around for that. In the meantime, I went to meet with Bill Hoffman, the Exhibit Manager at the St. Lucie County Aquarium, across the street from the SMS. He shared with me his experience with setting seagrasses up in his aquarium there. He said that at first, he would try to lay a patch of seagrass, with surrounding sediment into the tanks (like sod,) but that they kept dying. Eventually, he had success when he planted the plants into the tanks that contained the dead “sod.” But still, not every species he tried will grow in the tanks.

Bill loaned me some snorkeling gear so that I could go hunt down the seagrass beds that Robert Virnstein described to me. My only experience of seagrass is the Zostera marina at Bodega Bay, so I was interested in laying eyes on some other species. I found the dense Syringodium bed next to the boat ramp at the end of the Aquarium’s parking lot. It was remarkable to me how variable the density of both the seagrass as well as the algae were over a really small area. Sometime, the algae was so abundant and dense that I couldn’t even see the seagrasses. Other times, it was easy to see individual seagrass shoots poking out in the sandy sediment. Syringodium has cylindrical leaves, so that was different. The leaves were only about 8 inches long, and the rhizomes were very delicate compared to Z. marina.

Then, I went over to Chuck’s Steak House. There, I found a mixed bed with two kinds; I think Halophila and Halodule. They were about the same size, but their leaves were shaped differently. These were remarkably tiny! I will definitely have to re-write the sampling protocol for these.

After my little snorkeling adventure, I went to the SMS “Behind the Scenes” tour. I learned a lot about the Indian River Lagoon, which has significant temperature and salinity gradients, making it an incredibly biodiverse ecosystem. The tour was useful and interesting. Especially, the Mangrove experiments – couldn’t help but wonder about the phylosphere microbial communities on these salty leaves.

Eventually, I connected with Niclas Engene, who is interested in collaborating with us on a GoLife proposal to do Cyanobacterial genome sequencing/phylogenetics. I also chatted with a few people, including Jenny Sneed about which would be the best primers to use for algal diversity surveys. No one seemed to know, but at least I’m not alone in my uncertainty. I gather that the person I really needed to talk to is Justin Campbell, but he was probably on a plane coming back from Belize while I was there. Oh well.

I was in the Cape Canaveral area to view our Space Microbes getting launched to the ISS this past Monday, April 14th. Unfortunately, the launch was canceled due to a helium leak in the SpaceX Falcon 9 rocket. The next launch was scheduled for Friday the 18th, so we decided to stick around and wait for it. Jonathan suggested that I rent a car and head down to the Smithsonian Marine Station in Fort Pierce.

That’s where Valerie Paul works, and we’ve been talking to her about incorporating a microbial sampling component in the Thallassia Experimental Network that she’s currently setting up. This is modeled after ZEN, and they will be doing experiments in which they will be modifying grazing and nutrient levels at four sites (Indian River Lagoon, FL Keys, Carrie Bow Bay in Belize, and Bocas del Toro in Panama.) Unfortunately, Valerie is in Belize right now, so I scrambled to find other contacts in the area, or at least get some tips about where I could find some seagrasses. I decided to post some of the information I got here.

“I checked out google earth and it looks like there might be some patchy seagrass beds just north of the Cocoa Beach causeway that you might be able to see from the beach or walk out to if the water is super shallow if you are feeling adventurous. Looking on google earth, the large dark areas look to me like deep water and that there are some small greenish dots that look like clumps of seagrass potentially.”

Cool! I would NOT have thought to use Google Earth for this purpose.

Then, Pamela Reynolds suggested that I contact Erik Sotka (who I’d met at the ZEN pertners meeting in March) and he wrote:

I know a few seagrass beds in the Indian River lagoon (south of Cape Canaveral). I’ve collected amphipods from seagrass beds at the park across the road from the Smithsonian Marine Station. That’s a good place to start. Another place with accessible seagrass is at the Jaycee Park boat launch on the outer barrier island near Fort Pierce. Val (and some of her postdocs and staff) will know other accessible locations. Other seagrass specialists in Indian River Lagoon to ask:
– at harbor branch marine institute (~20 miles from SMS), you can try to contact Dennis Hanisak
– Robert Virnstein, Seagrass Ecosystems Analysts, seagrass3@gmail.com (386-546-0204)

Also, see some other contacts within this PDF of abstracts from a recent conference (http://www.unf.edu/uploadedFiles/aa/coas/biology/BENTHIC/BEM2014OralAbstracts.pdf). Download and search for “Indian River”

as a side note, if you want to goto Tampa Bay, I can point you to good, walkable sites for seagrass.
good luck seagrass-hunter.

Awesome! So, I contacted Dennis and Robert and (per Jonathan’s suggestion) a postdoc of Valerie’s (Justin Campbell).

I got this from Robert Virnstein:

Attached is a map with some labels.

At the “SI” site, where the Smithsonian Marine Ecosystems Exhibit is, there are grassbeds that extend about 40 m offshore. Most/All will be Halodule wrightii. You should be able to wade most of it. The Smithsonian lab/office is 250 yards east of the exhibit. And 560 yards east of the exhibit is Chuck’s Steak House (“SI2”), the first building on the left. From the restaurant parking lot should be better grassbeds. On the flats look for Halophila johnsonii. It might be only 1-2 cm tall, so look closely.

On the North Causeway (A1A North) stop at the first park/boat ramp you come to. There may be some grass there. For really good grassbeds, scramble south through the mangroves. There is a huge flat that has Halodule, Syringodium filiforme, and some Thalassia testudinum if you look hard, but you might have to wade/swim south about 100 m. Look at the Google Earth imagery and go back one time step to 2010.
Or you can swim straight out from the boat ramp, across the narrow boat channel, and 50 m from the boat ramp you should find dense grass beds, dominated by Syringodium.

At the “3a” and “3b” sites, if you can get south of the marina onto flats, I feel confident you will find Halophila johnsonii, a federally threatened species listed under the Endangered Species Act.

Or, if you go to the SI lab/office and can find Sherry Reed or Woody Lee, they have worked there for decades and really know the Lagoon. They know where everything is. Tell them I said hi. 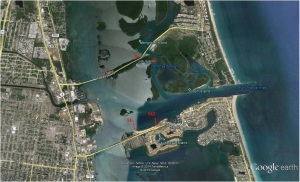 Are you kidding me right now? How amazingly helpful everyone has been! So, tomorrow, I’ll head over to the SMS and try to find Sherry and Woody. Hopefully, they can lend me some snorkeling gear so I can go check out all of these sites. Hooray for fieldwork!