On the Road Again: The Long Arduous Journey of Waiting for Our Microbes to Grow

**Note all photographs in this post were taken approx. 2 weeks ago and thus the winogradskies herein described are reflective of that time point.

These columns haven’t experienced much change except for a small increase in biomass towards the top of the layers. These three vials all still look relatively visually identical, which is reassuring as they were inoculated from the same water source and *should* be replicates of each other. 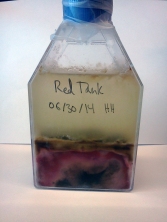 Microbial succession in action???? The two large columns that get full light (left and middle columns) were solid pink/black at 7 weeks, but now we are seeing some snow-white colored microbes intruding in. I wonder what these snow-white microbes are and what the earlier coal-black and pretty-in-pink microbes were doing metabolically that allowed the white microbes to now flourish in the columns. Alternatively, there could be no white microbes – perhaps the white is just the diatomaceous earth which is now visible again as the pink and black microbes recede into the past.

Overall, there is not a lot to report on the 5 mL tubes that were inoculated with water from different sampling locations. Except in the one above where we see a tiny band of purple!! This is the first 5 mL tube to show the presence of any pink and/or purple microbes!

Experimental Tubes (where we added either Potassium Nitrate or Ammonium Acetate) – After 9 weeks:

Overall, these tubes also look fairly similar to their 7 week incarnation. However, one of the Ammonium Acetate added vials has less black microbes at the bottom of the tube than it had previously (appearance of white microbes?). The Potassium Nitrate added vials appear to have a slight increase in the thickness of the layers. 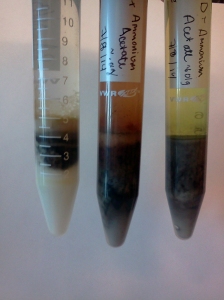 The most noticeable difference is that the Ammonium Acetate added dark vial’s liquid portion has a green hue which it didn’t have before. Additionally the pinkish hue in the liquid in the Ammonium Acetate added light vial is much darker than it was before. The Potassium Nitrate vials are similar to their 7 week counterparts; they just have more biomass and/or bubbles.

Update over. Hopefully, you’ll hear from us again fairly soon with a new update on our lovable wino’s!

1 thought on “On the Road Again: Adventures with Winogradskies”